I was off work for all of 2016 with my beautiful baby girl and now i am back, but still no blogs????

Well we have changed up our style of writing at GeoNet and our news stories have more personality, and flair! And this was my reason for starting the blog in the beginning, a place to write in a more 'fun' way, so there really isn't any need for it anymore. But I'll keep the blog sitting here and maybe one day i'll come back!

You can check out the GeoNet news stories here


Now you may remember when the Foo Fighters came to Auckland in 2011 we recorded the crowd vibrations on our instruments.

Well AC/DC played in Wellington on Sunday, and Auckland last night, and our instruments picked them up as well.

The shaking is caused by the weight of the fans dancing, as well as the sound system.


You can see the concert show up in the middle of the seismograph.


The Wellington concert looks bigger as our instrument was closer to the concert venue.


Looking at our Herne Bay instrument we can compare the two Auckland concerts, and you can clearly see (check out the scale) the Foo Fighters crowd in 2011 created a lot more ground vibration.

Whats up with those deep quakes?

As many of you know New Zealand is right in the middle of the boundary of the Australian and Pacific tectonic plates and this is the cause of all of our earthquakes and volcanoes! 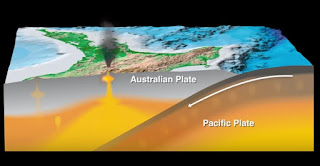 In the North Island the Pacific plate is going down underneath the Australian plate (this is called subduction) and this is why we get those deep earthquakes in the middle of the North Island.

This mornings M5.1 quake was 167km deep and we received over 3000 felt reports from people who felt it. Due to its depth the quake was not damaging, and most of the reports were of light/weak intensity.  (you can read more on intensity here).


The energy released by deep NZ earthquakes travel more efficiently up the denser subducting Pacific plate, rather than the overlying Australian plate and as a result these earthquakes are often felt very strongly to the south-east of where they occurred. So you will often see more felt reports away from the quake than directly above it.

This is shown well on the M5.1 quake today, the image to the left shows the felt reports we received.  As you can see most of the reports are away from the quake (highlighted by a rad star).


What about the rest of NZ?

In the bottom of the South Island the opposite is happening with the Australian plate subducting under the Pacific plate, so we also get deep events here.

And in the middle, for most of the South Island, the two plates are colliding and grinding past each other (why we have the cool Alps)


You can see exactly how the plates are moving under NZ, on a cool diagram here.


Here is a handy video by GNS Science, which explains how the tectonic plate boundary creates faults and earthquakes in NZ.

I'm sure most of New Zealand remembers either waking up to the shaking at 4:35am, or to the news of the earthquake 5 years ago. It was a day that changed many peoples lives from damaged homes and buildings, to some months later where friends and loved ones lives were tragically lost in the M6.3 Christchurch quake.

Although far in distance from Christchurch,  life at GeoNet also changed on that day, from all the science to be done, to the thousands of aftershocks that needed to be located.  This ultimately led to our big change to an automated earthquake location system SeisComP3 and our big website update (you can read more on that here).

You can read more about the earthquakes and the science behind them, on the Canterbury Quakes page  including, news stories and the numbers of aftershocks the region has had.

... is something we often hear at the office.

Now while an earthquakes magnitude is the true size of that particular quake and the energy it released at the source, it does not describe how that energy was directed,  and how the quake was felt on the surface.

So you can have two magnitude 5 quakes in different towns, with very different results:
~ one causes no damage and not all people felt it,  while the other caused damage in most houses,was felt my most people, and many were shaken and scared.

So why the difference? Read on to see

This is where Intensity comes in

You can see each quakes intensity on our website - its based on a number scale but we have added in words and colours to make it easier/quicker to see. You can see in the table below, the scale ranges from MM1 - unnoticeable (which may be felt by some people)  to Severe - which covers damaging up to worse case scenario MM12.

The two Christchurch quakes this Easter Weekend, both M3.8, were both MM5/Moderate - which if you read below in the table, were not small quakes!

So next time you look at an earthquake, check out its intensity - it will give you a better idea of the effects the quake had on people/buildings etc. on the surface.  If you look at your regions quakes you will see two intensities given, so how the earthquake was felt at its location, and how the earthquake was felt at your location. The Auckland page is a good example of this, as they don't frequently get quakes in the Auckland region, so you can see the quakes listed are all of a larger intensity, but only felt 'weak' in Auckland. 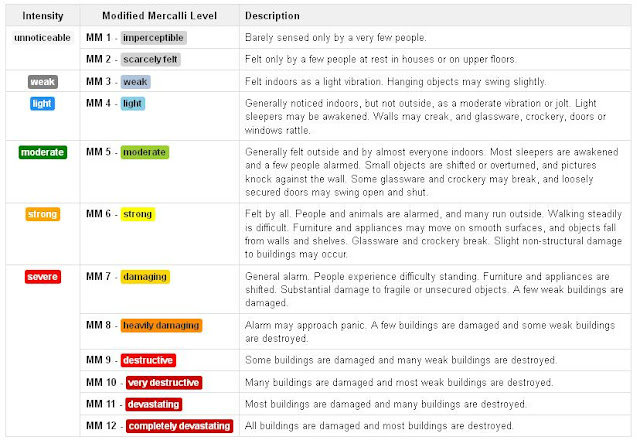 So those two Magnitude 5 quakes...
~ The first had an intensity of MM4/ light  and the second was MM6/Strong
So you cannot take a quake at its magnitude/face value, you really need to know the MMI level to truly know how the people on the surface felt it.

Some Intensity examples of our quakes:

Both the 2010 Darfield earthquake, and the 2011 Christchurch earthquake were MM9

Check out the boss' blog with more on felt intensity.

A Tardis Trip Down Memory Lane ...

The Beginning - Red and Green


The website geonet.org.nz that we all know and love, first appeared on the internet on May 20 2002.


As you can see it was pretty basic, with just the latest quakes and volcano cameras and volcanic alert levels.

It was nice and bright (and festive) and featured our lovely red and yellow stars for the earthquakes locations.


In April 2004 we added in 'Felt it' to the quakes, so you could tell us how and where you felt an earthquake.

Fun Fact: To date, the most felt reports we have ever received for an earthquake was 13,900+ for a M3.9 Auckland Quake! 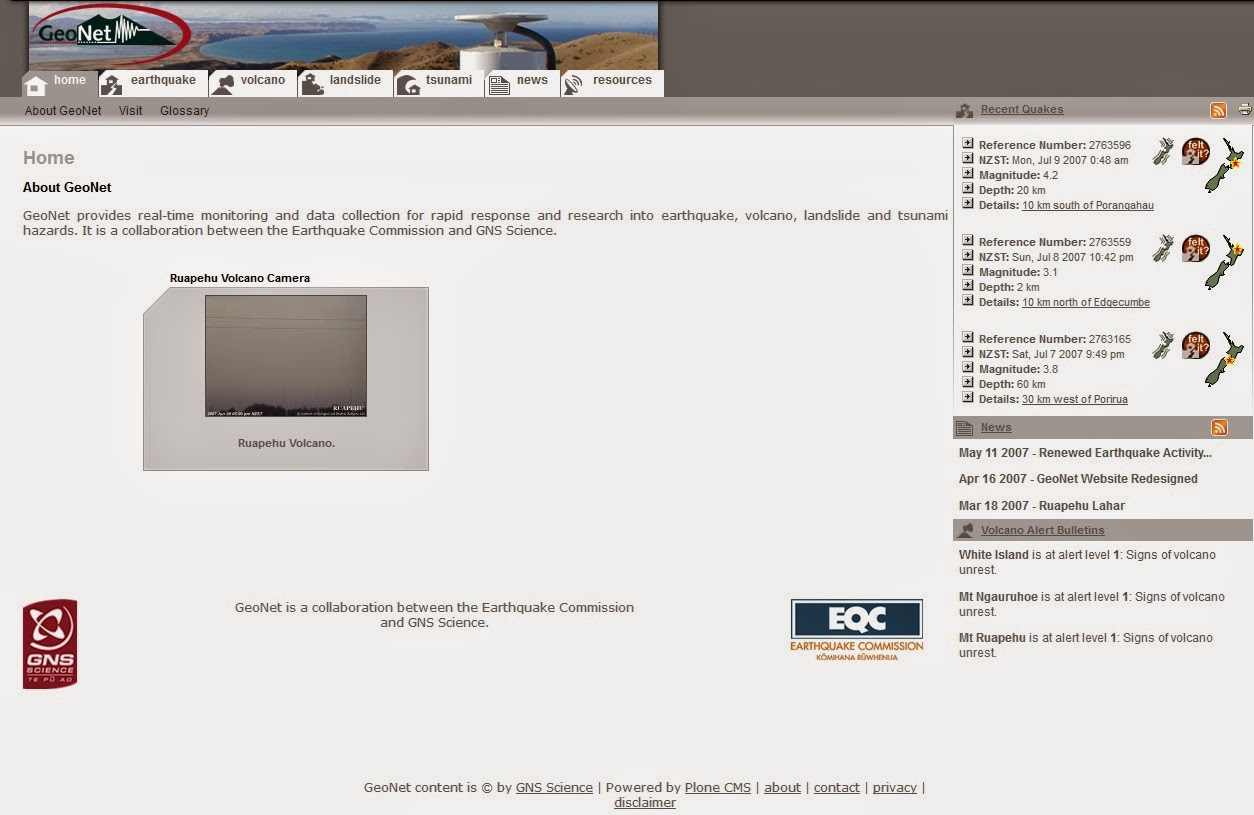 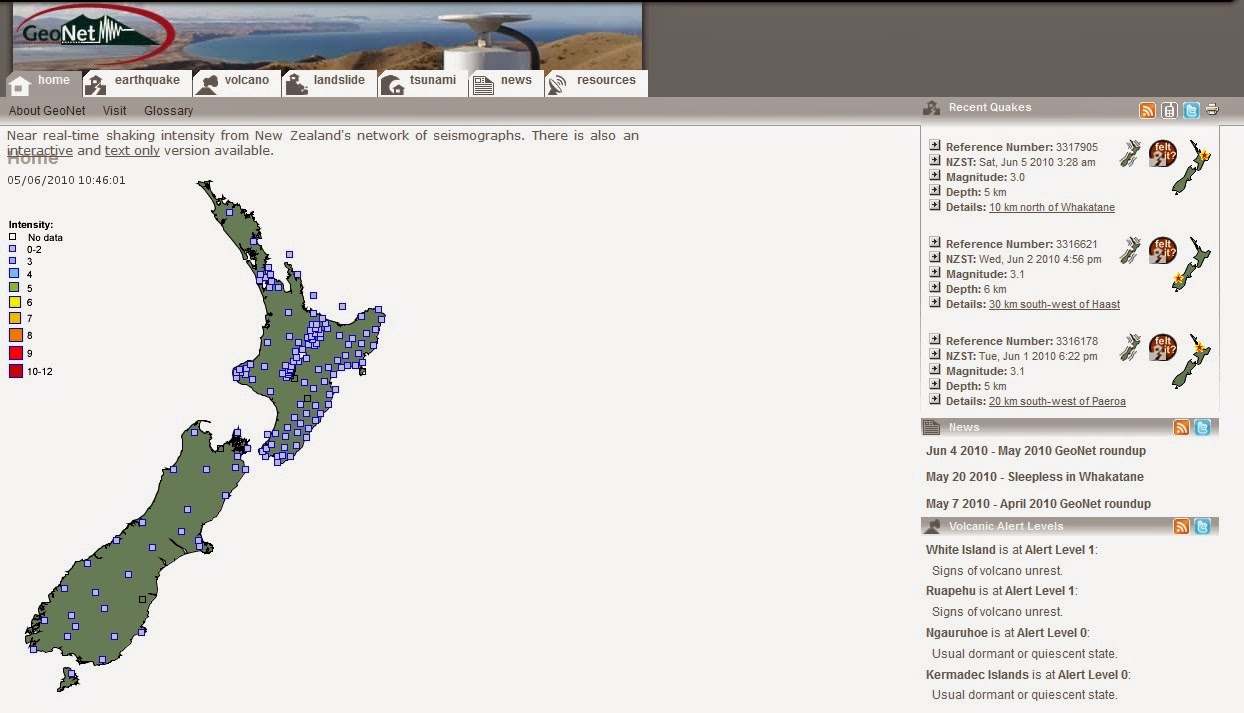 It was this time that GeoNet became a household name, if you check out the 'Google Trends' graph below you will see we were flying under the radar for a bit!  Luckily we had an awesome team of geeks and our website stood up to this heavy traffic! 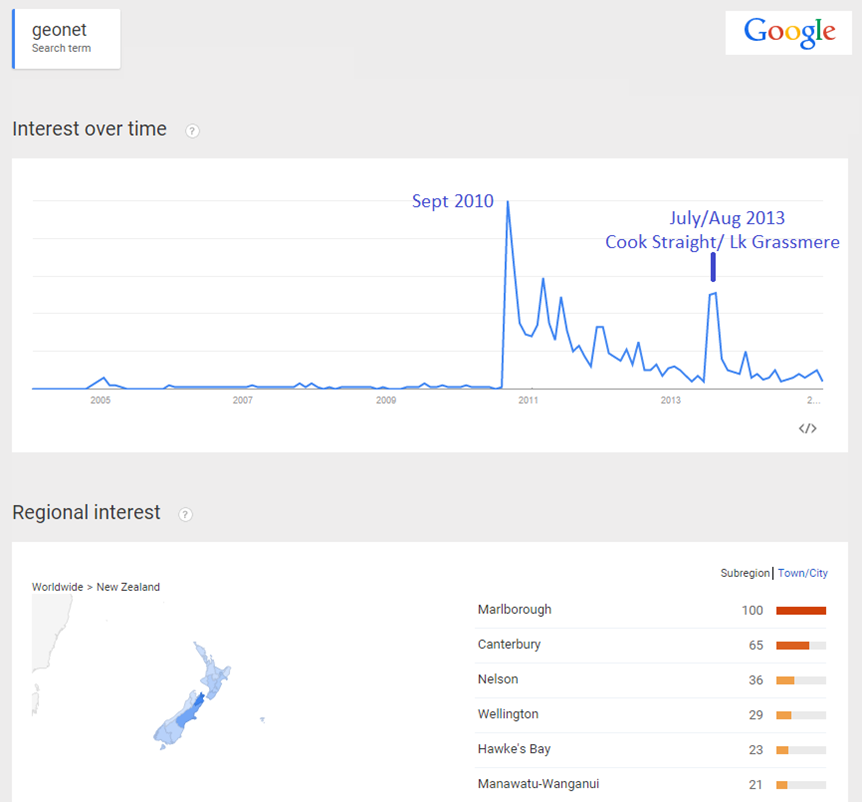 Fun fact: we had more web traffic in the week following the Sept 4 quake than the whole previous year!

Back in 2010 we had our duty officers locating the earthquakes and this took up to 20min so it was around this time we were getting the "Hurry up GeoNet, how big was it" comments!


And due to the large amount of aftershocks we were locating, we were limiting the quakes posted on the website, to the larger, more widely felt events. So then we had lots of “I felt it, why isn’t it on the website” comments!   So we knew we needed to fix this!

In 2011 we started testing the Automated system SeisCompP3 (If you are wondering why we didn't do this sooner, check out this Blog post by the GeoNet Boss)

So instead of a person logging on to their computer after they were alerted of an event, SeisComP3 automatically went to work as soon as the data started coming in! 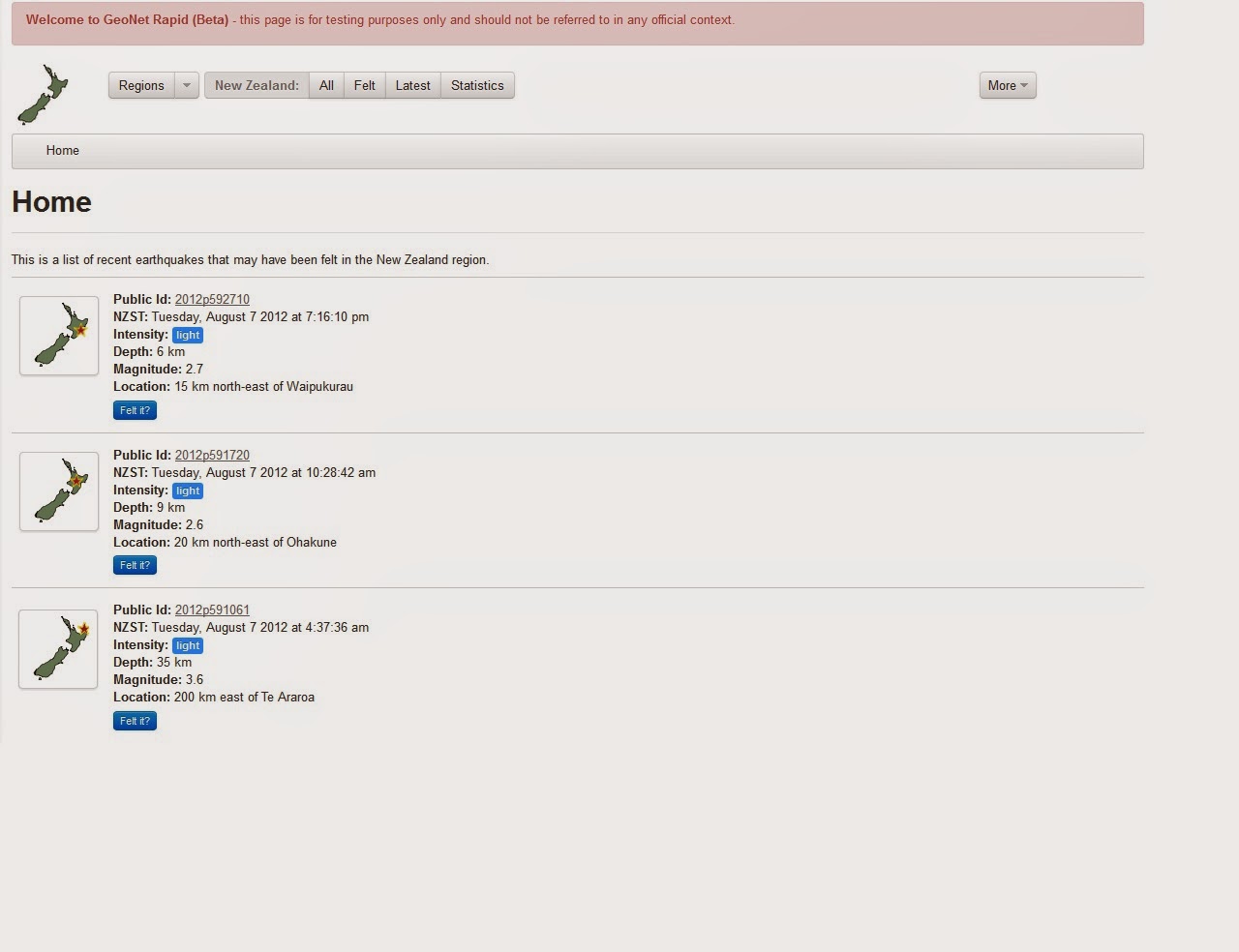 And in 2012 we launched the 'GeoNet Rapid' Beta website and then in September it went live. This was the biggest change to the website yet, and it took people a while to get used to the new way but the speed was definitely appreciated.  You can read more on how it works here

And this brings us to the website we have now, it may not be obvious but we are always working behind the scenes on geonet.org.nz to keep it awesome, and continue to make it better!

Another year almost over!  I thought i would keep it simple and just show you how our year was (its interactive so you can hover over the graphs and see the numbers)

I hope you all have a fantastic holiday break, though many of you, like us, will be working throughout!  And we look forward to another great year in 2015!
And yeah, i am aware that by posting this, the jinx factor is now pretty high .......
Posted by Sara at 2:50 PM 3 comments:

Sara
I am a Public Information Specialist at GeoNet. Over the past few years i've been growing the GeoNet name through social media and presentations, and my goal is to increase awareness of what GeoNet does and how people can use the science information available. I also help manage the info part of our website, answer public and media queries and occasionally get my name in the paper :-)